Bullous pemphigoid is the appearance of itchy, fluid-filled blisters on the skin. These blisters more often appear in areas where the body folds, such as the armpits, groin, and lower abdomen.

Bullous pemphigoid can affect anyone, but it is more common in people 60 years of age and older. Symptoms of this disease generally appear in one area of ​​the skin, but can also spread to all parts of the body. 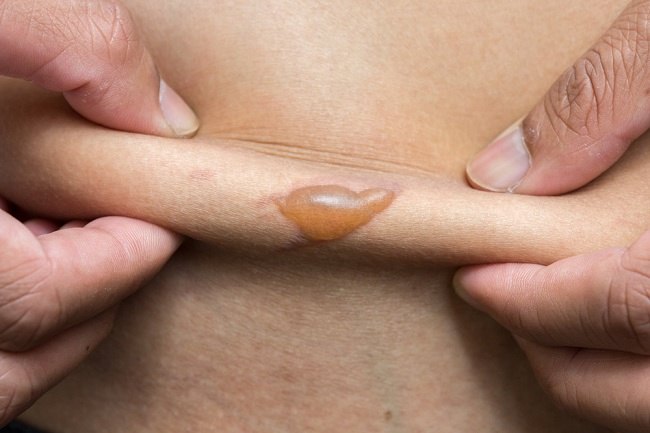 Bullous pemphigoid needs to be treated immediately, to prevent new blisters and skin infections from forming.

Bullous pemphigoid is an autoimmune disease . In bullous pemphigoid sufferers, the body's immune system turns to attack the skin tissue that connects the outermost (epidermis) and middle (dermis) skin layers.

The above conditions cause inflammation which causes the epidermis and dermis to not bind together, causing blisters to appear.

It is not known exactly why the body's immune system attacks skin tissue, but this condition is thought to be triggered by the following factors:

The initial symptoms of bullous pemphigoid are changes in skin color to redness, blackness, and itching. These complaints generally appear in the folds of the skin, such as the armpits, groin, or stomach.

After a few weeks or months, blisters will appear on the surface of the skin filled with clear fluid or fluid mixed with blood. These blisters do not break easily when pressed gently. However, blisters that tear or burst can be painful but don't leave scars.

To diagnose bullous pemphigoid, the doctor will conduct a question and answer about the symptoms experienced and the drugs the patient is taking, then proceed with a physical examination. To confirm the diagnosis, the doctor will carry out further examinations in the form of blood tests and skin biopsies .

Corticosteroid class drugs aim to reduce inflammation by reducing the activity of the immune system. This drug is available in the form of ointment and tablets.

Corticosteroid tablets should not be used in the long term, because they can increase the risk of developing diabetes, hypertension, high cholesterol, brittle bones ( osteoporosis ), and infections. Therefore, treatment will be stopped gradually when the skin blisters have disappeared.

Some examples of immunosuppressive drugs are mycophenolate mofetil , methotrexate , rituximab , and azathioprine .

If signs of skin infection appear or the blisters break open, the doctor will prescribe an antibiotic ointment, such as tetracycline hydrochloride .

Bullous pemphigoid patients are also advised to take several steps to prevent the wound from getting worse, namely:

Bullous pemphigus that is not treated immediately and occurs in the long term can cause a number of the following complications:

In addition, treatment of pemphigoid that is not appropriate to the patient's age, sex, and medical history can also cause complications, such as:

The cause of bullous pemphigoid is not known with certainty, so this disease cannot be prevented. However, there are efforts that people with this disease can take to prevent blisters from getting worse, including: